What Others Are Saying About Power Naps

Meditation music is campy. There, I said it. Phew. That felt good to get that off my chest. For many of us with adventurous ears, it might be difficult to get much into meditation music if it reminds you of an informercial, or the kind of stuff you hear on the phone when you’re put on hold when you’re trying to call your massage therapist. Another thing that makes meditation music so tough to get into for a lot of people is that it’s primarily electronic. Nothing wrong with electronic music, it’s just that sometimes we long for something more earthy and organic. There’s alternative rock, alternative folk, and alternative just-about-everything; however there doesn’t seem to be a lot said about Alternative Meditation Music. My definition of this pseudo-genre has to do with a fusion of acoustic and electric instruments, experimental and compositional elements, while creating an immersive experience, especially for younger listeners.

Trends in current meditation music some of us might refer to as “alternative” – for instance, binaural beats, which is a technique that we have intertwined into some of our meditation pieces. We do it in post-production by using digital effects to tune an instrument up in one ear, and down in the other. It’s quite an experience when using a headset, especially our “3-Minute Chakras” music. Another trendy thing we like to do, is to render some of our projects in pythagorean tuning, although not necessarily the exact temperament. It’s based off of A=332HZ instead of the modern standard of A=440 HZ. Some believe it’s the tuning of the universe, while others that are blessed with perfect pitch, it drives them crazy because it sounds like it’s about 30% flat. I like to see these as tools for healing, aids in people’s faith in the music and the process, and I also must admit, at times I wonder if these kinds of tools are just dorky marketing trends in the New Age Community that in ten years we’ll laugh about like psychic surgeons, colloidal silver, Kirlian photography and brewer’s yeast. 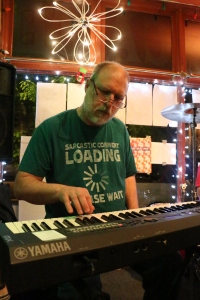 Most purely acoustic meditation music I’ve found is noodling over some finger-picking guitar, which is fine, unless you need something more etherial and immersive, like drone music. Didgeridoo and Native American flute music can also be a great place to start, and after a while, that can also get old and not very dynamic. Other acoustic based meditation tapes I remember as a kid was a single shaman drum beating for thirty minutes, and if that wasn’t annoying enough, sometimes there’d be a shaker or just a couple of sticks banging together along with the tape hiss. Another one I heard was a repeating goddess chant that was sung until the cows came home. Typically what you get is someone falling asleep on the white keys of a piano when it comes to acoustic music like this. It doesn’t take much musical skill to produce most of this music, and I found that producers seem to spend more time and money on the album cover design (and marketing) than the actual product. Kinda like a beautifully designed bottle of water.

It’s all good I guess, everyone has their thing; it’s just that the music I like to meditate to is stuff that typically isn’t from those kinds of publishers I mentioned. I discovered the ambient music of Brian Eno early in high school. Eno isn’t at all a new age spiritual guru, just an artist and composer. He just has a lot of listeners from the metaphysical world that really like him. Later on I started listening to some of the drone albums from Steve Roach. Very artistic, and not so “woo-woo” sounding. Another tasteful composer is Steven Halpern, who we may all know about already. I also found that people were meditating to Terry Riley, which I admire people that can meditate to some of his pieces because they can sound quite tedious at times. But than again, I listen to a lot of Steve Reich. 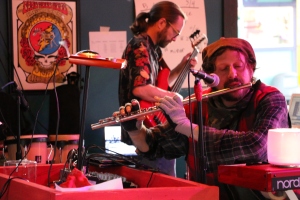 I grew up in the upper-middle-class progressive subculture of the urban west coast Pacific Northwest holistic zoo. It was awesome, as much as it was a confusing mess to behold as a child. We had a lot of tapes like this in our old Volvo: Kitarō, Ray Lynch, and some of them that just looked cool at the New Age bookstore, so we bought them. About five years ago, I was going through my iTunes making a mellow playlist. There was one particular ambient artist I was really getting tired of, and I was hungry for more. I love classic progressive rock, Dark Side of the Moon for instance, however we all know how tough it is to get into a deep meditative state with some of the loud surprises that a lot of these amazing albums have in them. Mike Oldfield’s Tubular Bells is another one from that era that has a lot of meditative sections, but isn’t very consistent, especially towards the end.

I realized it was time to start an ongoing project that would produce ambient music for various purposes, and Dialectic Flowers was born. Since 2015, we have performed and recorded music that is acoustic and electronic, from jazz to classical, and especially our mellow instrumental take on the prog-rock genre. In 2016, we produced a piece of music that was not intended for meditation. I started meditating to it with headphones, with a subwoofer, and in different ways and found it could have potential. I submitted it to the Insight Timer app wondering if they might publish it for us. To my surprise, we got thousands of hits and a lot of amazing testimonials from around the globe! I cried. It was the biggest breakthrough for the band we had, and I was very emotional. That was also during a time that I suffered an agonizing nine-month depression, and pursuing my career as an artist was instrumental in helping me back to sanity. 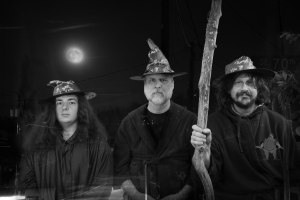 Living with bipolar with psychotic features, generalized anxiety disorder and PTSD has made my work impossible for me. I can’t count the number of times I’ve given up on my dreams, and it’s a death sentence every time. Mindfulness practices and movement meditation are some of the self-care things that has enabled me to actually do my work, after living on disability and support since 2006. Dialectic Flowers, along with my solo work, is my way of getting the life I need to live to make life worth living. This series of meditation pieces we call “Power Naps” is a body of music that I am very proud of, a marketable product, and a beneficial contribution to the wellness community.